Starting out with ThunderCats couldn't be easier. Generally when starting anything new, good research is always advisable, speak to the organisers and excisting teams to understand what you are about to undertake and how best to start; Whether you want to be a co-pilot for an existing driver or start up your own team.

There are many ways to become involved no matter your budget. As a motorsport, we are grass root and one of the cheapest forms of racing. The cost is not only split between pilot and co-pilot, there are no expensive tyres to replace and a 25 Litre fuel tank will see you through a days racing! As a guideline a used boat package starts from £3,500 up to a new rig at £8,500. A seasons racing will cost in the region of £1100 per person which includes your licence, entry fee, fuel and equipment.

To race at UK level, you will need to have undertaken an RYA Level II powerboat course (or present your boating CV to the RYA). A medical is required each year which can be obtained for between £40 and £80 and can be carried out by your local doctor. An RYA powerboat race licence is then required, this be obtained once you have completed the FREE race training events hosted by ourselves at the beginning of the racing season. 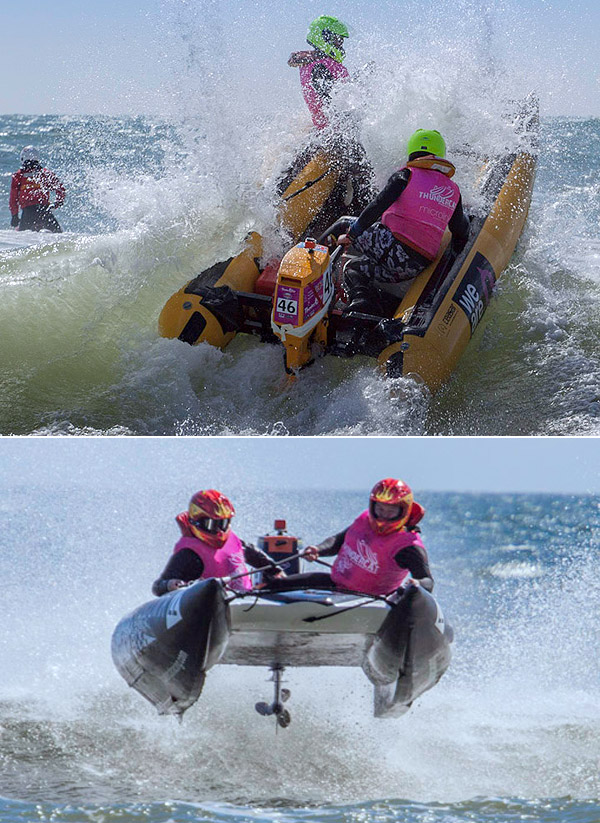 With costs very low, this class is a great entry level for youngsters to get started in powerboat racing from as young as 9 years old. The season runs from the beginning of April to the end of October and a season can be completed on as little as £1000.

These small monohulls provide some great action, both fast and competitive with an average racing speed of 40mph and are an excellent opportunity for all those who compete to learn the skills of racing and good sportsmanship.

All racing is carefully supervised by trained RYA Powerboat Racing personnel and licences are only issued after a satisfactory standard has been reached.

The GT30 class began in Scandinavia and was adopted by the UK in 2005 as the entry level Circuit Monohull class for drivers aged 14 and upwards with no age limit.

Since its inception in the UK, the class keeps on going from strength to strength producing some of the sports most exhilarating and close racing. These small monohulls provide some great action, both fast and competitive, with an average racing speed of in excess of 55mph.

The hull is the same as the Junior GT15 class so at the age of 14 existing GT15 racers have the option to upgrade to the GT30 class by swapping the engine for a relatively low additional outlay.

Each year an annual British Championship series of 6 rounds is held at venues across the UK. In addition drivers can compete in the European and World Championship events once they are competent.